​The Big Idea Study is a resource for teaching the Bible to a large group. It's an in-depth explanation of Scripture. It's an expository sermon or formal teaching, and is usually delivered in a standing position. It's presented in lecture format; any questions are rhetorical. The goal is to develop a good outline. Good outlines teach themselves.
The Big Idea Study consists of the following steps.

Choose a passage of Scripture. Passages are the basic units of thought in the Bible. They usually contain at least one central idea, and several details.

Generate an outline using the exact words of your translation. This is important. A textual outline is formed from the text of your current Bible.

​Resist the urge to look at other resources (translations, commentaries, etc.) during this step. Do your best to develop a textual outline on your own. You can modify it later.
A. By finding a Big Idea.

The smaller the Big Idea, the better. A Big Idea is usually just a word, phrase or part of a sentence. This is because you'll expand on it as you develop your outline. A Big Idea with too many words can lead to confusion when it comes to the development process. This will become clear as you go. For now, just remember, smaller is better when it comes to the Big Idea.

​The passage heading is not the Big Idea. At best it's a suggestion about a topic. The Big Idea is harvested from the words of the passage itself.

Sometimes the Big Idea is easy to find. Other times it requires prayer, patience, and careful observation over time. Repeated reading of the passage as well as reading the other translations can be helpful.

Take note of different types of speech. Especially the verbs. Often a key verb (and its surrounding words) can serve as a Big Idea. But also note other forms of speech, such as adverbs, participles, nouns, prepositions, conjunctions and interjections. Pay attention to locations, time, emotions.

Look for the big fish. Imagine you're standing before a large glass panel of an aquarium stocked with fish of different sizes. You're looking for a big fish, but you're noticing the medium and small ones at the same time. Finding a Big Idea involves observing several sized ideas at the same time. It consists of noticing the medium and small fish while you're looking for a big fish. They are essential to see because you'll use them later. As you progress in this method of study, you may find yourself putting together a complete study all at once. 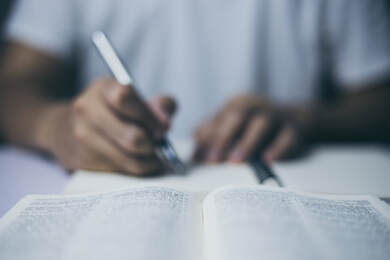 B. By finding the Supporting Ideas.

If you have too many Supporting Ideas, you may have included some Defining Ideas. Make sure to separate the medium and small fish from each other. You’ll need the small ones next.
​
While a Big Idea can be located anywhere in the passage, Supporting and Defining Ideas usually flow from top to bottom. Generally, they ​move from the beginning to the end.

Resist the temptation to prematurely depart from the passage to search for verses located elsewhere. If done correctly, the Big Idea study will produce too much study material rather than not enough. Limit other biblical references to explanations, illustrations, and applications.
C. By finding the Defining Ideas.

​Generally, a Supporting Idea has at least two Defining Ideas. Defining Ideas are often a single word or at most a couple of words. Multiple Defining Ideas may come from just one verse.
Here is a summary of the textual outline.

​The Big Idea: What is a main idea of the passage?

The homiletical outline is created by rewording the terms from the textual outline. Rephrase the Big, Supporting and Defining Ideas. Restating Scripture increases understanding, enhances comprehension, and aids in retention. Fresh vocabulary adds vibrancy, and livens the message. Contemporary terminology boosts relevancy. Use phrases and terms that align with your audience.

Create an engaging title for the outline. Use the Big Idea to generate a phrase that forms a question or addresses a relevant issue. Something that would cause people to want to know more. The title determines how you word and shape the following points.

Link the ideas. The Big Idea, a Supporting Idea, and a Defining Idea should form one complete sentence. Tie them together by adding words that create one sentence. For instance, "The truth about God..."(Big Idea), "....is that He is righteous..." (Supporting Idea), "which means he is the judge of all mankind" (Defining Idea).

​Explain, Illustrate and Apply the Defining ideas.  An explanation consists of a few well-worded statements that provide understanding and produce clarity. (Nehemiah 8:8) An illustration is an example, and comes from sources such as Scripture or everyday life. Limit what you say about yourself, and maximize what you say about God. Avoid repetitive stories about your family. The application should direct the listener to know, do, or feel something.

Or ask a question, and share answers about the Defining Ideas. This is a great way to deepen the thought about a crucial word and phrase. For instance, "Here are three reasons why this is so important." ​Providing answers to a key question accelerates maturity.

Maximize the Defining Ideas. Most of your commentary work should occur at the level of Defining ideas. The exception is if a Supporting Idea does not have any Defining Ideas. A simple message will contain many points. Spending too much time talking the Big and Supporting Ideas can create information overload when it comes time to talk about the Defining points. Defining points often yield critical information. Spend the majority of your time talking about the smaller fish, and only what is necessary about the Big and Medium fish.

Personalize the outline. Construct statements in an inclusive manner by using the terms us and we. Statements without pronouns are impersonal and academic. The term "you" can distance the speaker from the audience.

Consult resources to aid comprehension of the passage. Now is the time to look at other translations, commentaries, language tools, dictionary, encyclopedia, etc. This may result in modifying or changing some of the terms in the outline.
Conclude the message by summarizing a few key points. End with a "So let's..." phrase that highlights a few key thoughts from the message. ​These are thoughts you emphasized. Reword them for freshness.

A Banner Verse is a word or phrase that summarizes the entire book you are studying. It's the Biggest Idea. It's the Big Idea for the all the individual Big Ideas, and serves as a series title. It is found by reading the entire book you are studying. Read with the aim of locating a key word, phrase or verse that summarizes the main point of all the chapters. Finding it requires concentration and focus. Listing a key word/phrase from each chapter, then choosing the one that works best can be helpful.

​A Banner Verse has a universal nature about it. It's globally true for the entire book. A good Banner Verse easily connects with each individual Big Idea. See sample below.
​
* This is actually the first step if you are teaching through a book of the Bible. It's listed here because of the need to first understand the process of developing individual Big Idea messages.
Series Title: What Really Matters
"For I want you to understand what really matters." Philippians 1:10 NLT​
​(This is the Banner Verse)
What Really Matters is...
(Each of the following is a Big Idea and serves as the title for individual sermons.)